December 12th marked the beginning of Krampusnacht – the holiday event for Secret World Legends. Given my work schedule this week, and being without a car until we could take it in for service, I haven’t really gotten into the game until today.

I thought I was burned out from the Halloween event, but seeing all of the snow, Christmas trees, and costumed characters has certainly put me back in the mood!

Every hour you can kill a boss called Hel, which is a huge naked lady who packs a helluva punch! You can find her in Agartha, where the seasonal raids are. Every day that you log in during the event you are given a Malevolent Snowflake, which you open after killing Hel. You also get a message from your faction handler and a package for every kill. The message and package don’t have a cooldown. You get them each time you kill Hel. If you’re behind in snowflakes, like I was, you can open those until you run out. You just have to kill Hel each time you want to open one. The buff lasts for a little bit, giving you time to exit the instance before you have to open your snowflake.

The seasonal rewards are pretty fun! I’m currently rocking an ugly reindeer sweater, and previously I was wearing a teal Elfin shirt. Looking around, there’s so much to get! There are Victorian era caroling costumes, different elf outfits, and general winter-themed clothing. On my last round, I got the Revenant Bear pet. I haven’t looked into how many pets are new for this event, but my brother told me there’s about three. My niece is big on them. The first day of the event, upon logging in, the main reward was a Christmas-themed tree pet. Part of the Padurii creatures in the game, they resemble a mixture between a bulb and a tree stump. I’m not sure if it’s the tree hugger in me or the rampant eccentric, but I freaking love these little tree-guys! 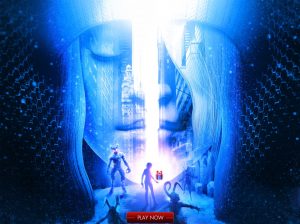 The title card for the game has also been changed to reflect the new event. Instead of the red we’re used to seeing on logging in, we now see cool blue. The girl in the picture is also holding a present, and surrounded by ugly Krampus figures with glowing eyes. It’s creepy, stylish, and everything you could want from Secret World Legends’ holiday event.

Another change that Krampusnacht has brought is the introduction of the Winter Cache. Drops include weapons (with wintery skins), a winter clothing set, and more. For the moment I’m just enjoying collecting the caches, I’m still working on the Haunted Cache. I don’t have the tarantula bike, the weapons skins, or the black widow pet. Once I do, I’ll most likely sell the rest of my caches to a vendor.

Continuing my run of poor in-game fashion (according to Phoebe), I have decked myself out in the blue knitted reindeer sweater, knitted heart gloves, boots, and bell bottoms. Since the most recent patch also introduced the much-awaited Barbershop, my hair is also now purple.

Dipper contends that I look like a teacher, Phoebe thinks my bell bottoms are embarrassing. I, however, am in my glory! I am on a mission to collect as many of the knitted

sweaters as I can. Right now I have a black knitted sweater and my Illuminati faction knitted ugly sweater. I also have the teal Elfin tunic. The purple accents of which match my hair flawlessly!

Look for future posts on this most festive of events, and if you haven’t already, get thee to the Secret World! You don’t have to get a paid Patron account right away (though the cache key, and shardless teleporting to cities makes it extremely worth it!), you can just play for free. Either from Steam or from the website directly. It’s not going to become a second job like some online games (Warcraft – I’m scowling at you!) and the player base is largely friendly and helpful. If you do decide to give it a whirl, you can find me as “deadaeris”. Drop in and say hello!