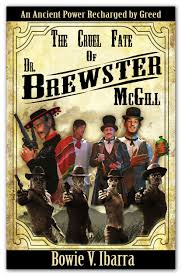 Author Bowie Ibarra’s newest tale is a Lansdale-esque romp through the Wild West, called “The Cruel Fate of Dr Brewster McGill“.  Ibarra is up to his usual tricks – slavering undead, exciting chases, and intriguing characters – flavored with the right amount of comic relief for good measure.

It is often said that “curiosity killed the cat”, and that is most certainly the case in “The Cruel Fate of Dr. Brewster McGill”‘!  The titular character, Dr. Brewster McGill, is a snake oil salesman.  He travels from town to town with his assistant, Isidrio.  Together they  extol the healing powers of their elixir, which is purported to cure any ill.  Business continues as usual until they run into a rival schyster.  Their competition also sells a “cure-all elixir” but the catch is that his elixir actually works!  McGill becomes desperate to harness the secret elixir, and chase is on!

Enter into the excitement the extremely powerful Eye of Mictlantecuhtli – the other piece of the puzzle.  Dr. McGill and Isidrio find themselves drawn deeper into the intrigue surrounding the elixir, The Eye, and the powers that bind them.

Sprinkle in a healthy heaping of zombies, curses, cures, and trickery and you have a recipe for a great story!

If you’re looking for a fast-paced page-turner, then you certainly need to read “The Cruel Fate of Dr. Brewster McGill” by Bowie Ibarra!  Then, as a courtesy, head on over to amazon.com and post your own review of the tale.